In 2019, we spoke to AFP reporter Laura Bonilla about the world's most infamous drug trafficker 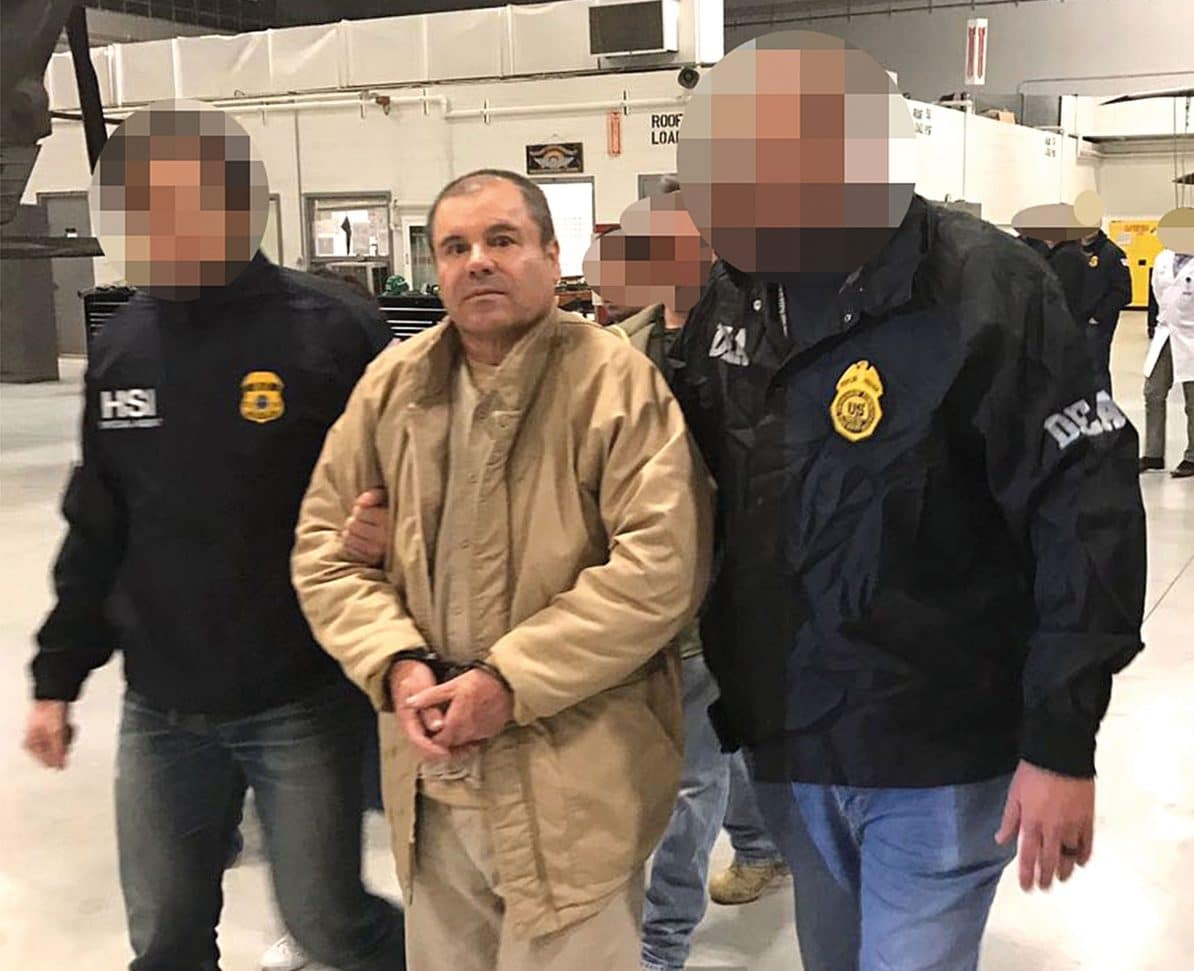 Joaquín ‘El Chapo’ Guzmán photographed during his extradition from Mexico to the US, 19th January 2017. Photo: PGR/Prensa Internacional via ZUMA Wire

This article was originally published in Delayed Gratification in June 2019

For three months the trial of Joaquín ‘El Chapo’ Guzmán – the world’s most famous narco trafficker – was pretty much my whole life. I was in court every day and just getting in to the room was a drama. Space was limited, so journalists were sleeping on the street to make sure they got a spot, I was getting up at 4am every day to make sure I got in. The trial would last until 5pm and then I’d often be writing late into the evening.

“We’d be searched every day before entering the court and we’d have to surrender our phones. We weren’t allowed to record any video, take pictures or make audio recordings. They couldn’t risk anything leaking that could identify the jury members in case El Chapo’s associates found out who they were and applied pressure on them to find him innocent. So it was old school journalism for three months – just you, your pen, your brain, and the most incredible story being recounted in front of you. It was overwhelming at times, there was so much evidence and so many witnesses – a parade of Guzmán’s former associates, friends, enemies, lovers…

“One of the most memorable characters was Christian Rodriguez, the ‘IT guy’. He was a 20-year-old Colombian university graduate running his own company when he was first hired to handle the IT security for Guzmán’s Sinaloa cartel in Mexico. This is not a guy who was born into narco trafficking, this was a smart university student coming from a middle class family. He knew he was working with criminals but he wanted adventure, the money was good and they sent him all around the world. He was caught by the FBI in a sting operation in the US and started collaborating with them. So at 20-something he was working for one of the most powerful cartels in the world, while at the same time he was also informing on them to the American authorities. “We were told that El Chapo learned of this and tried to have him killed and he fled. He had a wife and child that he had to leave behind to start a new life in America under a hidden identity. Now he can’t have any contact with them or ever talk about his past. The trial was full of stories like this – it was like a different movie plot every day, but it was all real.

“There was the big Colombian narco trafficker who had undergone so much plastic surgery to avoid detection that he looked grotesque. He was arrested in Brazil with his lover, a Brazilian bodybuilder, and is now in jail. When he was working with El Chapo he used to have several huge planes and he would ship the cocaine to Mexico and from there El Chapo would send it to the United States. The Colombian authorities confiscated more than a billion dollars from him. He told the jury he’d killed approximately 150 people, adding ‘I didn’t keep count’ without a flicker of emotion. It was scary, it was surreal, it was fascinating.

“Most of the witnesses testified expecting to get a reduction on their sentence or better conditions in jail, but that depends on the judge, the prosecutors can’t promise they’ll get anything. It’s a risky move. Even in prison El Chapo is a dangerous man and there’s always the threat of retribution. It was horrific sometimes hearing about the violence his cartel inflicted. We heard descriptions of unimaginable torture being carried out.

“Guzmán was born poor and was desperate to get out of poverty. He never learned how to read or write very well, which we saw from text messages of his that appeared as evidence in the trial. But he was a natural businessman and throughout the 80s and 90s he rode the wave of the drug business, the most lucrative in Latin America. The US authorities estimated that he sent something like 450 tonnes of cocaine, amphetamines and marijuana to the US over 25 years, amassing a personal fortune of 14 billion dollars. They hope to confiscate this, but so far they’ve failed to find a single dollar.

“Several of Guzmán’s former associates testified that they had paid hundreds of millions of dollars in bribes to high-ranking government officials, legislators and bankers. We also heard that Guzmán himself lived like a king before his arrest. He had ranches in every state of Mexico, he had a private zoo with a train that would take him and his guests around. He had a yacht called ‘Chapito’, ‘little Chapo’. He was flying all over the world. Witnesses at the trial said they accompanied him on gambling trips to Macau and to clinics in Europe where he received rejuvenation treatments.

“Guzmán was first arrested in Mexico in 2014, but escaped through a 1.5km tunnel under his jail cell. He was captured again in 2016 and extradited to the US. There’s no doubt the arrest – and the trial – has been a big publicity coup for the DEA [Drug Enforcement Agency], and Guzmán is the biggest narco trafficker the US has ever put behind bars.

“However, I’m not sure it’s going to result in a reduction in the amount of drugs being trafficked. In fact, the amount of drugs coming from Mexico to the US has gone up since Guzmán’s arrest. The Sinaloa cartel split after Chapo’s capture, but it is still alive. Part of the cartel is led by Guzmán’s sons, part by Ismael El Mayo Zambada, who co-founded the cartel with Chapo and who is now around 70 years old. Unlike Chapo – a man who always courted fame and wants not only to have a movie made about his life, but to star in and direct it – Zambada stays hidden. He’s never spent a day in jail. It doesn’t matter if it’s Chapo, Zambada or somebody else, as long as there are people who are ready to buy drugs there will be people capitalising on that demand and using violent methods to protect their business.

As the jury came in to deliver the verdict, Coronel turned towards me and asked what the English word is for ‘guilty’”

“We’re seeing more and more people – from all classes – consuming drugs. According to the 2018 Congressional Research Service report, Mexican drug cartels take in between $19 billion and $29 billion annually from drug sales in the US. I think a lot of people don’t realise, or don’t want to realise, all the violence and all the lives that are lost along the way to their party. The same report also says that in 2017 a record 29,000 people were murdered in Mexico. During the 2017-2018 election period 114 Mexican candidates and politicians were killed by crime bosses and others in an effort to intimidate public office holders.

“My colleague Javier Valdez, AFP’s stringer in Sinaloa, was killed in the street in front of his office two years ago. He was a leading voice in the investigations against drug traffickers in Mexico and founded Ríodoce, a weekly magazine dedicated to the coverage of organized crime. He was murdered, presumably on the orders of members of the Sinaloa cartel.

“Despite the violence, there are people in Mexico who love Guzmán. El Chapo is this almost mythical figure. He has donated a lot of money to the poor people of Sinaloa state where the government has been pretty much absent. When he was captured people from Sinaloa were very worried, saying they felt unprotected now that El Chapo was in jail. 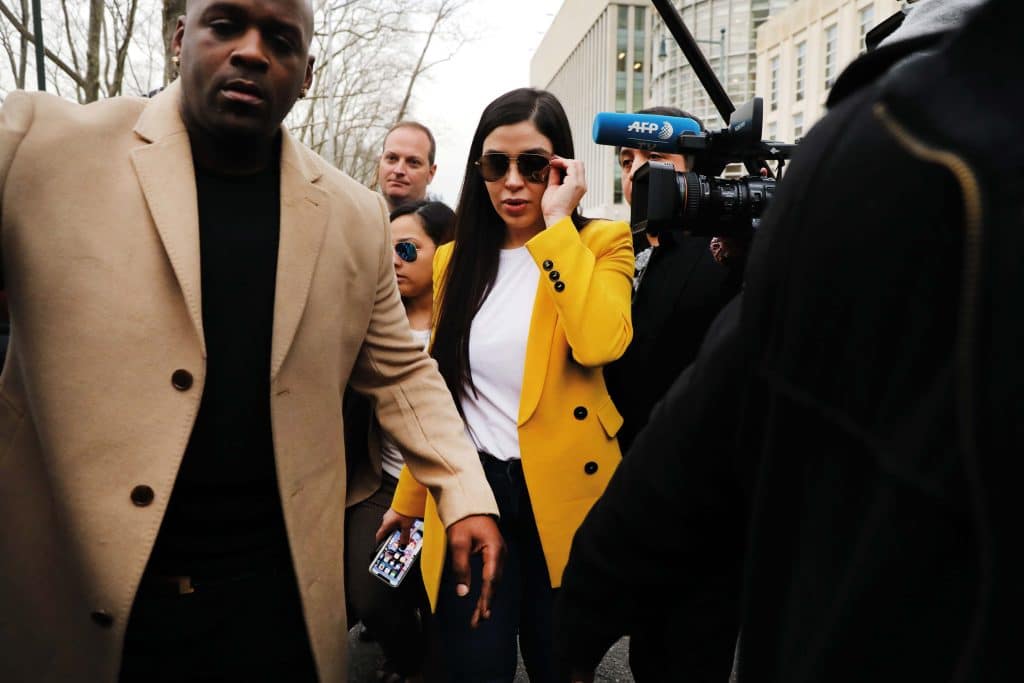 “You could see this devotion on show at the trial: I met one couple who even flew to New York to be there as a way of celebrating their wedding anniversary. There was a female priest who would pray for Chapo over a copy of the bible every day from five o’clock in the morning.

“On the day of the verdict I was sitting next to El Chapo’s wife, Emma Coronel, another big character. She was a former beauty queen and would be in court almost every day of the trial, immaculately made-up, sitting a few metres from her husband. As the jury came in to deliver the verdict, she turned towards me and asked in Spanish, my mother tongue, what the English word is for ‘guilty’.

“The jury found Guzmán guilty on all ten counts of drug trafficking. He didn’t show a lot of emotion during the trial, but when the jury announced the verdict, he looked at Coronel, blew her a kiss and made a heart sign with his hands. She replied with the same gesture.  It will be one of the last times she will ever see him, as the authorities don’t let her visit him. It was yet another strange moment. I’d spent three months listening to some of the monstrous things this man has done, but it ended with him telling his wife he loved her.”

Slow Journalism in your inbox, plus infographics, offers and more: sign up for the free DG newsletter. Sign me up

Posted on Monday, February 7th, 2022 - Categories: Moments that mattered, MTM on this day. 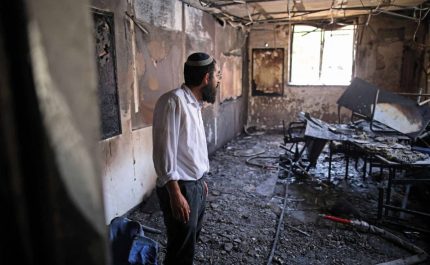 Eleven days in May: 5. Riots in Israel’s ‘mixed cities’

Toxic shock: Salisbury in the aftermath of the Skripal poisoning 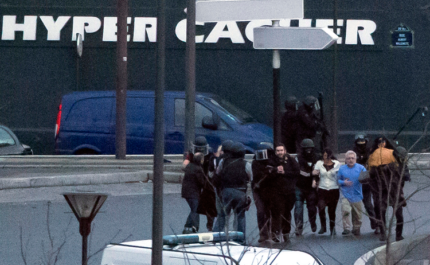 The exodus: Why are French Jews moving to Israel?