House of Cards infographic: The evil-ometer 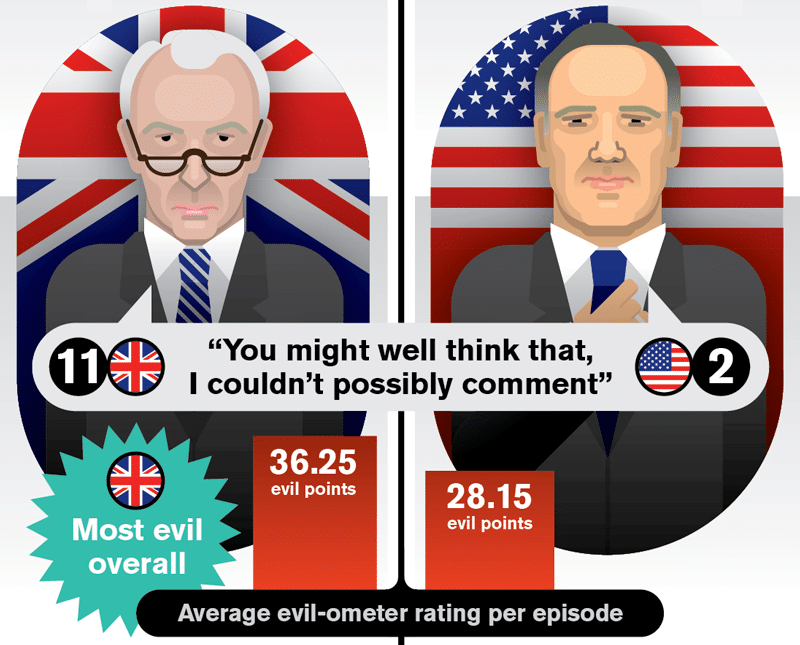 One of our favourite infographics in issue #18, in the mail today, is ‘House of cads’, our analysis of evil behaviour in House of Cards.

The idea was simple: to compare all the awful things done by the main protagonists in the 1990s UK version (Francis Urquhart, played with chilling glee by Ian Richardson) and the recent US version (Francis Underwood, played with psychopathic vigour by Kevin Spacey) and work out which Frank was the worst, on an evil-per-episode basis.

The problem when assembling our data was how to track the reprehensible behaviour without giving away what happened in any given episode. In order to remain spoiler free, we created our own measurement scale which would allow us to assign a value to each action and give an overall score.

And so the DG evil-ometer was born. We watched all 12 episodes of the UK version and all 39 of the US, wrote down every evil, sinful and simply unpleasant act and classified them using this metric of Machiavellianism. See below for the full list and see here for the infographic.

9) Commissioning or provoking killing / murder, “something just shy of treason”

Join the Slow Journalism Revolution today DG subscribers get:
Up to 25% savings off single issue price plus 50% discounts on all our classes