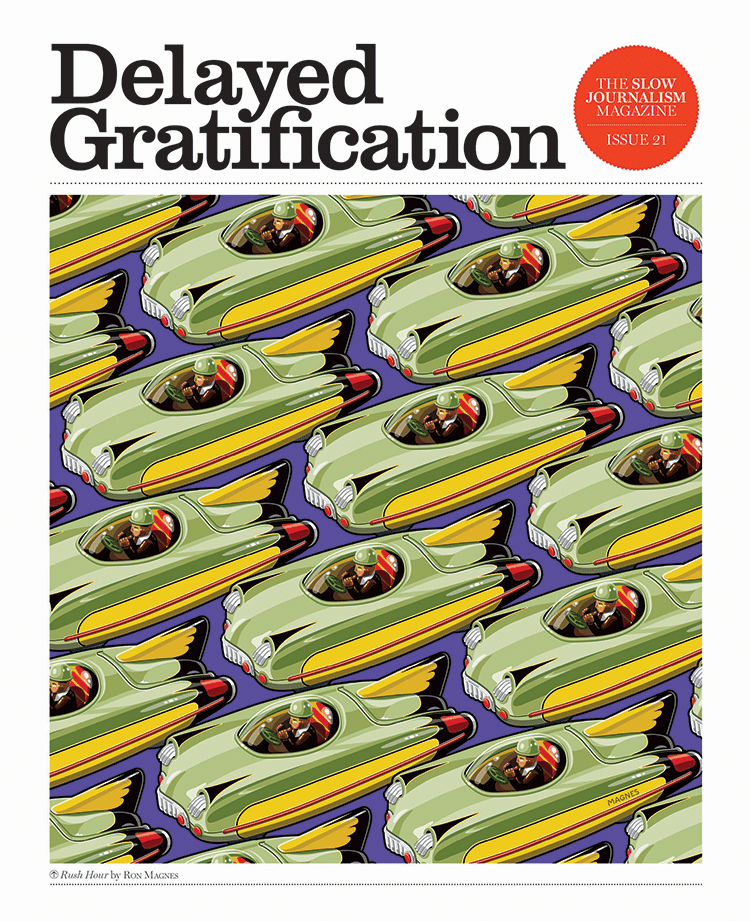 As Delayed Gratification #21 starts dropping onto subscribers’ doormats today, we’re very pleased to share our new cover with you. Rush Hour was created by Ron Magnes, an illustrator and animator from Pittsburgh, Pennsylvania.

Magnes recently completed his largest ever project for the Cravings exhibition at London’s Science Museum. We asked him some questions about Cravings, Rush Hour and his thoughts on the news of October through December 2015.

What’s the thinking behind Rush Hour?
It reminds me of those days I would spend hours commuting back and forth to work. I started to think how people do the same thing over and over, day after day, rushing to get somewhere most of them don’t want to be, then rushing back and waiting for the cycle to begin again. What began as a straightforward single car image has transformed into something a little more conceptual.

You have just created a huge mural for the Science Museum in London – how did that commission come about?
The Science Museum asked if I would be interested in this project they had called ‘Cravings’ [an exploration of how food affects our bodies, brains and eating habits] and it ended up being the largest project I have ever worked on. There were 22 separate illustrations of food that, when joined together, measured over 65 foot.

What news story of the quarter particularly grabbed your attention and why?
The San Bernardino attacks. I can’t wrap my head around the senseless violence. Innocent people going about their daily lives suddenly taken from this Earth. The world has become a violent place and when it hits close to home it becomes that much more frightening.

For the full interview with Magnes, pick up a copy of DG #21 in our shop.